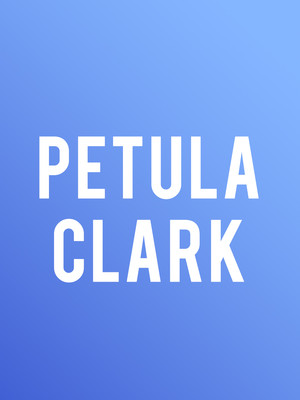 The one, the only, Petula Clark!

The world renown Petula Clark shows that age sets no limitations when it comes to doing the things you love, at the age of 86 the international sensation embarks to head out across the states in a brand new tour! From her first hit in 1959 to her latest album (the French-Canadian Vu d'ici') Clark has inspired a generation of musicians with the likes of John Lennon, Michael Jackson and Tom Jones all quitting to be an admirer of hers.

Beginning her career at the tender age of 9, when she entertained troops on the BBC during World War II, Petula Clark has been at the forefront of British music ever since. Throughout the 50s and 60s Clark became known for her upbeat pop songs such as 'Downtown', 'I Know A Place' 'My Love' and 'A Sign of the Times', as well as featuring in countless films like Finian's Rainbow and Goodbye, Mr. Chips. Having now sold over 68 million records world wide, don't miss this living legend as she heads to your town!

Sound good to you? Share this page on social media and let your friends know about Petula Clark at Theatre Maisonneuve.