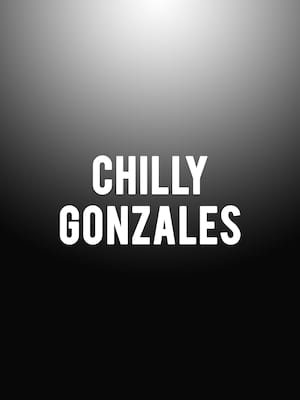 Genre-bending modern renaissance man Chilly Gonzales has crafted a long-lasting and influential legacy thanks to a pioneering spirit and drive to constantly experiment. 'Gonzo' as he's affectionately known, is often hailed as the Django Reinhardt of the piano, the instrument that proved a gate way to avant-garde production techniques. Difficult to pin down, the multi-talented virtuoso has explored the realms of underground rap, alternative pop, indie rock, electronica and trip-hop with stunning results.

Approaching his instrument with classical and jazz training, but with the attitude of a rapper, Gonzales boldly dragged both genres into the 21st Century over the course of twenty studio albums. Career highlights include the records Solo Piano, Solo Piano II and Solo Piano III, a 2013 Grammy Award and a Guinness World Record for the longest solo performance. Don't miss this chance to see the unorthodox innovator live in concert!

Sound good to you? Share this page on social media and let your friends know about Chilly Gonzales at Theatre St. Denis.