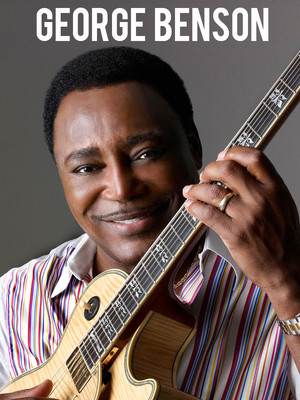 Pity the man who has to be George Benson's support act.

George Benson is quite simply a legend of modern jazz music. A tremendously skilled guitarist and vocalist, his ease with any genre he turns his hand to has meant huge crossover success; in 1976 Benson was the first musician to achieve a platinum-selling jazz album and went on to win an astounding 10 Grammy Awards. From bebop to pop, this musical great can do it all and with a charming smile to boot.

The septuagenarian's finger work is as lightning fast as ever, but it's his innate sense of groove and rhythm that really gets a crowd going. His setlist will contain the best of his stellar career, from the contemporary jazz of his earlier years to the funky disco hits of the 70's and 80's. Watching this consummate entertainer live is one to cross off the bucket list.

Great concert event. May be the best band that I remember more

This was a birthday present to myself to finally get to see George Benson.... more

Sound good to you? Share this page on social media and let your friends know about George Benson at Salle Wilfrid Pelletier.