Sorry! You missed Years and Years at Metropolis 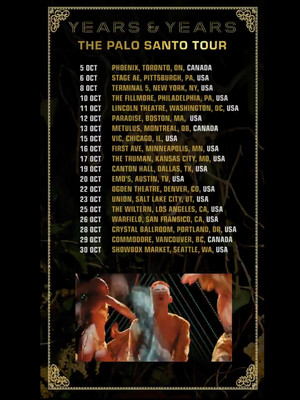 Why See Years and Years?

The follow up to the outfit's 2015 debut album Communion, which became the fastest-selling debut in the UK from an unsigned band, Palo Santo is the hotly anticipated return to their trademark left-field pop. Lead singles 'Sanctify' and 'All For You' signal a compilation of slickly produced dance-floor filling anthems that tell the story of a fictional society of Palo Santo, a place where robots reign and the humans left behind are used as a means of entertainment. It's an invigorating reinvention that finds the band pushing pop boundaries and blurring the lines between analog, synth, sexuality and gender.

Sound good to you? Share this page on social media and let your friends know about Years and Years at Metropolis.