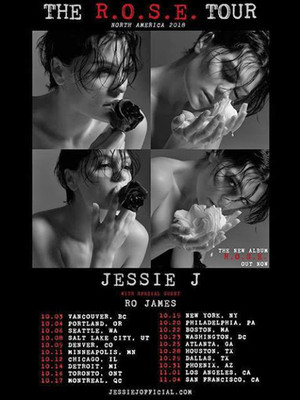 The Domino and Bang Bang superstar is touring America

UK superstar Jessie J is taking her recently released, four-part album R.O.S.E on the road. After taking a break from releasing music over the last four years, Jessie J will return back to center stage in October with support from opening act, German singer and songwriter Ro James.

The four part album is extremely different to the powerhouse singers big radio hits. The album is more stripped back and is Jessie speaking from the heart. Each letter of the title, R.O.S.E, signifies something different. Realisation, obsessions, sex and empowerment.

Though Jessie J hasn't been seen much in the limelight over the past few years, this doesn't mean she hasn't been busy. Her most recent venture was competing on china's show SINGER, which marked her as the first international contestant to ever compete. After wowing the views each week, it's no surprise that she won.

Sound good to you? Share this page on social media and let your friends know about Jessie J at Metropolis.