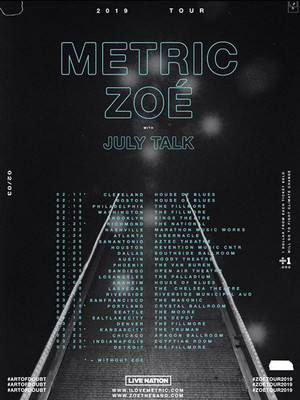 "Pagans in Vegas deepens the new-wave dalliances of its predecessor (2012's Synthetica) with their slinkiest, slickest palette to date."

Indie-rockers Metric have returned with their latest album, Art of Doubt. The synth-pop sounds doing the rounds in pop music today has more than rubbed off, but don't dismay, lead vocalist Emily Haines still gives each track the untamed edge synonymous with their new-wave sound. The 27 date tour will see Metric co-headlining with Mexican Rock band Zoe, who together will kick the tour off in Cleveland before rounding things up in Detroit.

Formed in 1998 at Toronto, they're not only one of the few indie-rock bands whose versatile sound can take on the evolving nuances of dance influences whilst still retaining their original fan-base, but they're also one of the few bands whose line-up hasn't changed over the years. Originally formed as a duo with just Haines and guitarist James Shaw in 1998 under the name Mainstream (not quite as catchy we reckon), they expanded to include two additional band members in 2001.

Sound good to you? Share this page on social media and let your friends know about Metric at M Telus.