Sorry! You missed The Amity Affliction at Club Soda 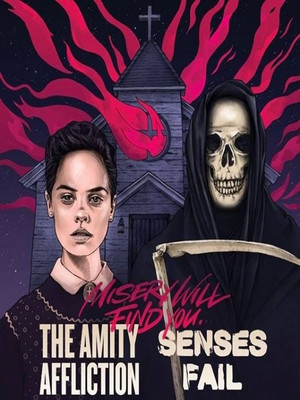 They say misery loves company, but it's music lovers that are going to love Misery, the sixth studio album from The Amity Affliction

Why See The Amity Affliction?

Join The Amity Affliction on Their Misery Will Find You Tour

Heavy metal band The Amity Affliction recently released their sixth studio album, 'Misery,' which debuted at number one, making it their fourth consecutive album to hit the number one spot. To celebrate, the Aussie natives will head on tour across America, kicking off in California.

The Amity Affliction are one of Australia's biggest metal bands and have released six successful studio albums, selling over 145,000 records worldwide. The band are known for their melancholy lyrics that reflect on vocalist Joel Birch's past struggles with anxiety and depression. Their upcoming tour is a fantastic way to start 2019!

Seen The Amity Affliction? Loved it? Hated it?

Sound good to you? Share this page on social media and let your friends know about The Amity Affliction at Club Soda.