Sorry! You missed A Conversation with Barack Obama at Centre Bell 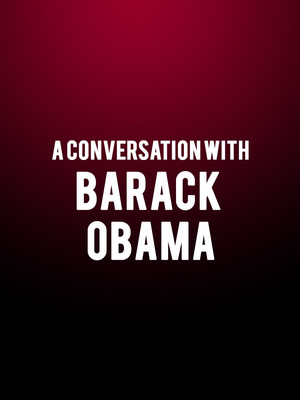 A Conversation with Barack Obama

Our spirit, a restless searching for the right solution to any problem; an inclination to dream big dreams, and an insistence on making those dreams come true; an enduring faith, even in the darkest hours, that brighter days lie ahead. That is the genius

Why See A Conversation with Barack Obama?

On November 4th 2008, Barack Obama was elected the 44th President of the United States becoming the first African American to do so and ushering in a new era of economic prosperity, healthcare reformation and clean energy. Over the course of two terms, his diplomacy wound down wars in the middle east, fostered new relations with Cuba and made giant leaps in race relations in the country. Suffice to say, the story of his journey to the presidency and beyond is the stuff of American political legend. Don't miss a chance to hear about his fascinating life and career in his own words during a special live appearance featuring the main man himself!

A charismatic and reassuring voice in times of great upheaval and unrest, Obama's trademark uplifting speeches will go down in history ranked next to those of Martin Luther King Jr, Abraham Lincoln and John F. Kennedy amongst other great American orators. His latest talking tour is the perfect platform for a thought-provoking commentary on today's greatest issues and an intellectually-driven discussion of current events.

Sound good to you? Share this page on social media and let your friends know about A Conversation with Barack Obama at Centre Bell.