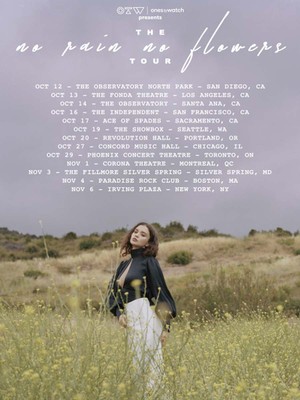 Don't miss Sabrina Claudio on her The Truth Is Tour!

The Truth Is Tour

Rising star Sabrina Claudio is back for 2019 with her The Truth Is Tour! Having released two brand new singles this year (let's hope there is an album on the way), Claudio is hitting the road on a mammoth 39-date trek which sees the young singer criss-cross across North America before heading across the pond to Europe! Beginning her music career by uploading tracks to SoundCloud the Miami born singer-songwriter released her debut album, No Rain, No Flowers in 2018.

Growing up in Miami, Claudio has been heavily influenced by world music including the rhythms of salsa and meringue as well as R&B and jazz. Taking from her inspiration Claudio has cultivated a soulful, unique and sultry sound, with relatable lyrics and diverse melodies.

Six months after uploading her first song to SoundCloud Sabrina Claudio had already earned 3 million plays. Grabbing the attention of music fans and critics alike Claudio commercially released her first 16 track EP entitled Confidently Lost in 2016, which subsequently shot to the top of the R&B charts, sitting just behind the likes of Khalid and The Weeknd. A year later the young star released her About Time mixtape which also landed the star in the R&B top 20.

Sound good to you? Share this page on social media and let your friends know about Sabrina Claudio at Corona Theatre.